UpLily is a web service for uploading and downloading files over HTTP in situations where transferring files between hosts is hindered by network policy or accessibility.

The service can run locally on a personal computer or 'serverless' cloud services such as AWS Elastic Beanstalk and Heroku Dynamos. 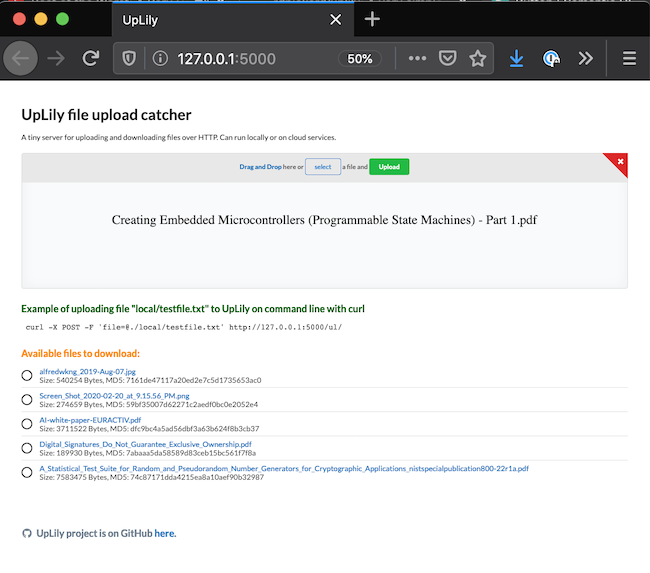 When two users are in networks that don't allow incoming connections from the Internet, set up a UpLily instance in as a Heroku application as a 'drop off location'

User on corporate network that has constrained files leaving the network

It isn't uncommon for corporate IT to put restrictions on network file transfers. Email size is often capped, filesharing sites such as AWS S3, box.com & PasteBin are often blocked by web proxies, protocols such as scp and ftp blocked at edge firewalls.

"Barebones" smart devices or appliances don't often have the capability to run file sharing protocols that are common on personal computers or full servers. HTTP is an almost universally supported protocol by even the most basic systems.

Running on a free tier Heroku Dyno in the cloud

After you're finished, stop and erase the Dyno

Running on a locally on your machine

This method requires that you have Python 3.4 or greater installed.

This recipe works fine with a python virtual environment.

The output of running application.py will tell you the URL to access the web app.

Running on a AWS Elastic-Beanstalk

This method requires you have an existing AWS account, the AWS command line tools installed.

This method has a monetary cost billed by Amazon. It is probably low, but it isn't free to run on AWS.

After you're finished, stop and release all of the AWS resources

And a whole lot of great Python3 modules that are listed in requirements.txt file.