Ghost is a free, open, simple blogging platform. Visit the project's website at http://ghost.org, or read the docs on http://support.ghost.org.

This is a fork with some improvements from https://github.com/cobyism/ghost-on-heroku. I have forked and improved this repository as the original developer seemed to have abandoned his repo recently. In this repository I have upgraded ghost to ghost 2.X and added cloudinary as a free storage alternative to amazon's s3. If you are still interested with the ghost 1.0 version please visit the original repository.

The latest release of Ghost is now supported! Changes include:

The following video is a step by step tutorial: 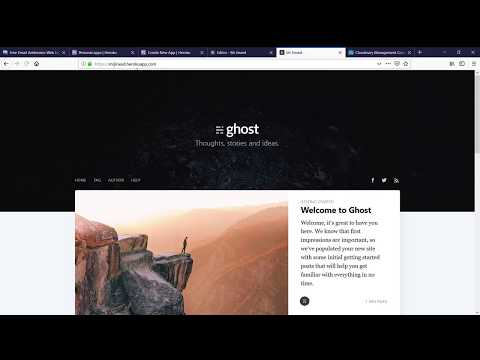 Things you should know

🚫🔻 Do not scale-up beyond a single dyno

Ghost does not support multiple processes.

If your Ghost app needs to support substantial traffic, then use a CDN add-on:

This repository is a Node.js web application that specifies Ghost as a dependency, and makes a deploy button available.

Optionally after deployment, to push Ghost upgrades or work with source code, clone this repo (or a fork) and connect it with the Heroku app:

Then you can push commits to the Heroku app, triggering new deployments:

See more about deploying to Heroku with git.

This repository locks Ghost to the "last tested good version" using the standard yarn.lock file. If you want to upgrade Ghost on your own, you will need to clone or fork this repo as described above. You will then be able to run:

If you're worried about packages beyond the root ghost server being outdated, you can check using yarn outdated.

If you have problems using your instance of Ghost, you should check the official documentation or open an issue on the official issue tracker. If you discover an issue with the deployment process provided by this repository, then open an issue here.

Released under the MIT license, just like the Ghost project itself.